At St. Aidan’s Winery, Lindisfarne has produced mead in England for centuries with rich historical roots. The Holy Isle of Lindisfarne is a tidal island one mile off the coast of Northumberland, England’s most Northern county.

Lindisfarne Mead, sold as Lindisfarne Original in the United States, was developed during the last century to capture the deep rooted historical and cultural overtones of the region. In wanting to keep the history of the lands alive, Lindisfarne has embraced ancient Rome’s favored approach of using grape juice in the fermentation process.

The island is cut off from the mainland by the North Sea two times a day. The tide relentlessly obeys the rhythms of the moon, making delivery and dispatch a logistical nightmare with safe crossing times changing daily. 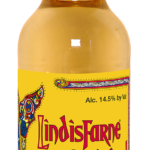